ManpowerGroup In the news

As the global expert on labor market and employment trends, ManpowerGroup is frequently sought after by national and global media outlets for its expert insights into forces evolving the world of work. Here are a few recent samples of media articles and interviews featuring ManpowerGroup’s unique perspective.

Select a year
See all ManpowerGroup in the news

MILWAUKEE, Sept. 12, 2017 /PRNewswire/ -- (NYSE: MAN) – Hiring prospects are looking up for job seekers around the world in Q4 2017. There are no negative employment Outlooks reported for the first time since 2009 according to the latest ManpowerGroup Employment Outlook Survey. Hiring confidence is strongest in Japan, Taiwan, Costa Rica, India and Hungary.

"We are seeing sustained hiring confidence from employers around the world after some years of caution," said Jonas Prising, Chairman & CEO, ManpowerGroup. "Countries including Spain, Italy and Greece are back on track and job prospects across the world are looking up. In the UK, employers in financial services and construction report the strongest Outlooks, reinforcing their need for access to talent. Across the world, lower unemployment, strong hiring intentions and demand for increasingly specific skill sets all point to a growing skills mismatch. In this tight labor market organizations need to work harder than ever to reskill existing employees and upskill future talent. It's time to get smart about how to attract, retain and develop the workforce of tomorrow."

To view complete results for the ManpowerGroup Employment Outlook Survey, visit www.manpowergroup.com/meos. The next survey will be released 12 December 2017 and will report hiring expectations for Q1 2018. To receive the latest survey results each quarter, sign up here.

About ManpowerGroupManpowerGroup® (NYSE: MAN), the leading global workforce solutions company, helps organizations transform in a fast-changing world of work by sourcing, assessing, developing and managing the talent that enables them to win. We develop innovative solutions for over 400,000 clients and connect 3+ million people to meaningful, sustainable work across a wide range of industries and skills. Our expert family of brands – Manpower®, Experis®, Right Management® and ManpowerGroup® Solutions – creates substantially more value for candidates and clients across 80 countries and territories and has done so for nearly 70 years. In 2017, ManpowerGroup was named one of the World's Most Ethical Companies for the seventh consecutive year and one of Fortune's Most Admired Companies, confirming our position as the most trusted and admired brand in the industry. See how ManpowerGroup is powering the future of work: www.manpowergroup.com 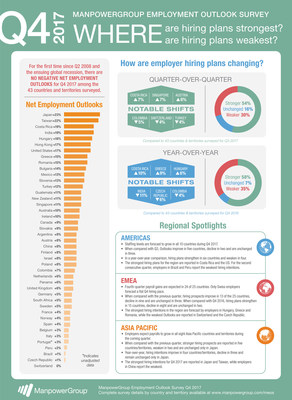 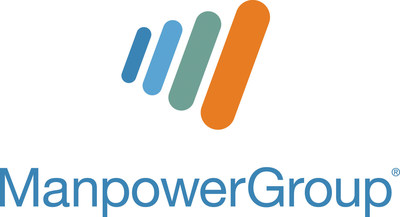